Writing with F-Bombs, Curses and Words of Power

I think a lot about curse words. I hear them from my children, the television, the world. They come at me from every angle. This may be, in part, why I don’t generally use them unless someone scares me or I stub a toe. It took me many years of consciously trying to get comfortable with the word “fuck.” If you paused when you read that to wonder why, you aren’t the only one. I often wondered why I wanted to desensitize myself to a swear that sits one from the top of the American swear chain. The answer is, now that I have lost my revulsion/fear of it, I can utilize it’s strength by adding it to my own. I’m still not there with “cunt,” frequently ranked #1.

I believe in the power of words. Throughout history, words have been considered magical–power words, true names, curses. Words carry community, define our abilities, group us in classes, restrain us, free us, transport us to other worlds . . . When it comes to illness or struggle, words can greatly empower, allowing us to understand ourselves or loved ones in ways previously impossible because we did not have the language to grasp individual need. And, just as easily, words can block us and tear us down.

Recently, I read an interesting blog post from another writing instructor who said he disagrees with use of the term “shit” to describe any sort of writing, and will never use it with his students. Specifically, he was referring to applying the word as a quality assessment of one’s work. I shared my post Writing the Shit in which I talk about “shit” in the literal sense, as the mucky life experiences we often get mired in but can choose to metaphorically compost through writing and use as fertilizer for growing a better future. He said my essay didn’t sway him, and that’s fine by me, but in my classes, I teach students to write as a release, to accept their negative experiences as negative, so I have no qualms using “shit” in that context. Basically, I’m using “shit” as a power word. Still, I would never describe what anyone has written as “shitty,” even if I did enjoy Anne Lamott’s “Shitty First Drafts” (read it here) as an affirmation that written words don’t have to come out right the first time.

My son uses “bitch” as a power word. He flings it at me when he is overwhelmed, overtaxed, hungry and unable to grapple with the multilayered demands of the external world. You know, when he’s having a tantrum. On one hand, this is not okay with me. I try not to take offense, but it happens. I’m human. On the other, because my son never uses the word unless he’s really, truly hit his max, it’s helpful. It doesn’t matter if he’s not even a tween yet and adolescent in his vocabulary–because he only uses it at critical mass, the word never loses its pungency, always grabs my attention. Plus, there is evidence to show that swearing eases pain among other uses. The same is true in writing.

Allow me to linger here for a moment. When you are learning to write more effectively, you spend time on long and short sentences, when to use them to heighten your emotional setting. Alternating sentence lengths and then using several short sentences in a row is a great way to build to a climax . . . which is where you would deploy your X-rated language and garner the greatest reader response. (It doesn’t have to be a power play. The four-letter word might just be the best word.) Pop-culture is dotted with humorous characters defined by their expletive-laced dialogue, but they are only funny when surrounded by straight-laced (and often highly intellectual) individuals who offset their (usual) idiocy. 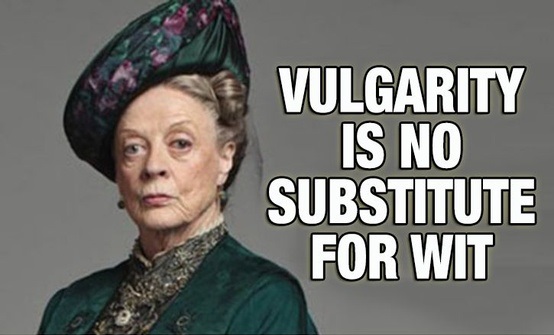 To date, this piece contains the most nefarious language of anything I’ve ever written publicly. I’m sure I have a couple of mercurial pieces kicking around in my journals, but the gist of what I’m saying is I only deploy questionable language in two situations: when I privately need to express the emotion in order to release the thoughts associated with it, or to drive home an emotional point in a story, poem or essay. I try not to use this language verbally because it perceptually dumbs me down. Let’s face it, I’m a woman of color in America. I’m already viewed at a disadvantage. Just take a peek at the stereotypically gendered versions of this e-card:

Back to the subject at hand. I’m a coach for people who are working through trauma. Aside from being perceived as less intelligent by the majority, if I come at clients with profanity in my conversational speech, I am choosing to make less room for their emotions because they may receive my strong language as emotional aggression.

This isn’t to say swear words can’t be used compassionately. I recently bucked to attention when my therapist reflected my emotions back to me using the term “fuck.” I’m sure I wore my shock through my whole body. The truth is, he got it just right. He said for me what I hadn’t been able to say to myself. The word and emotion connected and I sat up straighter, more equipped to own the issue and move on. It got me thinking about how friends will listen to what’s stressing you and tell you, “That’s fucked up.” It feels so good to be heard.

But let’s not limit cursing to negative situations. “Shit” is regularly employed to positive ends. You just won one thousand dollars? “Shit!” Shout it, draw it out, whisper it. The aim is the the same. It’s an utterance of excitement, joy or approval. What if, instead of “Shitty First Drafts”, the chapters was titled “Shit! I Finished My First Draft!” It tells a different story, right?

Truth be told, I have significant difficulty wading through expletives when they are aimed at people. We are all complicated and make mistakes. I would even broaden the popular social definition of “profanity” to include any sort of name-calling. This is why I humble myself when I feel a grudge forming and guard my tongue. It’s tough to engage anyone who swears for the sake of swearing. I never know when to take them seriously. I tend to distance myself or ignore swearing when it makes me uncomfortable. But I don’t believe in censoring the individual. While I would step in and suggest a more gentle approach should they turn those words inward, I believe it’s worth it to know a swear and know when to swear it. Power in words.

10 Free Resources for Creating a Writing Practice for Self Care

And I Will Carry What is Mine

Shawna Ayoub is an essayist, fiction writer, poet and instructor with an MFA in creative writing from Indiana University. Some of her work has been published in The Manifest-Station, Role Reboot, [wherever], The Huffington Post, The Oxford Review and Exit 7. Her writing explores the intersections of race, place and survivorship. She writes with honesty about her own experience in order to transform pain.