If only this feminist hadn’t curved the nice guy, she could be a real woman!

Throughout my life, I have faced the challenges of working and living with men whose fragile egos required constant attention, pandering, and suppression of my own personality and strength in order to keep their masculinity secure. I spent many years married to such a man (we’ll call him David). The magnitude of capitulation required to prevent upsetting his self-image was all consuming, destructive, and oppressive.

The challenges to David’s ego were omnipresent. When I was at work, David would constantly call and message me to ask me to listen to him chat, ask me to make calls, go online and find something for him, or address his freak out du jour. If I was late getting home, the guilt was immediate. “I haven’t seen you all day!” he’d whine. “Don’t call your mother/play with the children/enjoy your hobby, pay attention to ME!”

And god forbid I didn’t feel like having sex; he’d have a full blown temper tantrum. The shards of his fractured ego lay scattered through our lives, waiting to slice open the hand that brushed past.

The strength to leave him came at last, after far too many second chances for David. I’ve become a more realized version of myself, far more alive than the shadow I had been, existing only to validate his self-image. Finally, I can give names to the destruction he wrought on my psyche: emotional abuse, narcissism, rape.

In the long, slow process of healing and recapturing my own voice, I have become more outspoken on issues of equality, sexism, and patriarchy. Like many others, social media is a platform I like to use to address and discuss these issues as they arise, either by another person’s commentary, world events, or the intrusive, inescapable memories of David.

By speaking out, I’ve learned that fragile male egos abound. Perhaps you’ve witnessed the explosive defensiveness of many men when a challenge to their ego arises. Memes and commentary on male fragility, like the comic below, abound. Sadly, and kind of hilariously, these images provoke the exact response from men that they depict.

Can a feminist get a word in edgewise?

And it happens all the time. Whenever I have made a social media comment criticizing sexist men, another man has gotten offended and jumped to defend their gender. Though I do get supportive comments from the men sometimes, the vast majority of support comes from other women. And there is ALWAYS at least one man who becomes vocally outraged.

When a male friend posted the above comic, I laughed, clicked ‘Like’, and moved on. Until (surprise, surprise) a man got upset over it. I’m sure you’ve seen it; the slightest whiff of opposition to sexist male behavior, and jerks start knee-jerking. This jerk felt the comic was attacking men as a whole, and that to take issue with the behavior of a members of one gender was, in his definition, sexist. To top it off, because I pointed out how he was reenacting the final panel for us, he informed me that I myself must be sexist and “hate all men.”

Another fragile male ego I had to contend with online was that of a guy we’ll call Ed, who I had turned down for a date in the brief span of my new-found singlehood. It was the day after Valentine’s Day, and Ed was feeling sorry for himself that he didn’t have a date. He posted on Facebook that all of the women who were buying their own chocolate on sale wouldn’t have had to, if only they hadn’t “curved the nice guys.”

His meaning was obvious; he considers himself a nice guy, and all of the women who rejected him are fools. Oh no, women having to buy their own candy? Will we ever learn?? If only I hadn’t curved him, I could be a real woman!

Ed’s rejection by women had challenged his fragile ego, and he lashed out, looking for validation. Lots of women commented on his post, confronting his assumption that by being ‘nice’ he is owed a date. I tried to help Ed (who considers himself a feminist, by the way) on why that attitude was problematic. His response? To delete all such comments and block the women who took the time and patience to try to enlighten a ‘feminist’ ally. Like David, Ed couldn’t accept defiance of his self-absorbed beliefs, and instead pitched a fit.

Also, “feminist” is not a bad word.

When a fragile male ego breaks, it doesn’t only hurt them. The fragments of their broken egos are weaponized, used to slice and stab. This retaliation can be scary, violent, abusive, or even fatal to those who dare oppose them.

The root cause of fragile masculinity is embedded deeply in our patriarchal society. When such men are denied what they see as their rightful reward for being male (whether it be attention, promotions, dates, or sex), they act out to try to reclaim a “male” position of supremacy.  Patriarchal attitudes are so pervasive that many men forget (and deny) that patriarchy even exists.

And don’t even try to address the patriarchal system; it fractures their self-image and questions their position in society, which in their minds equates to condemnation of all men as evil and sexist. When the supremacy of maleness is threatened, fragile men feel compelled to defend themselves from what they interpret as a personal attack, crying “Not All Men!” in an attempt to shut down criticism. 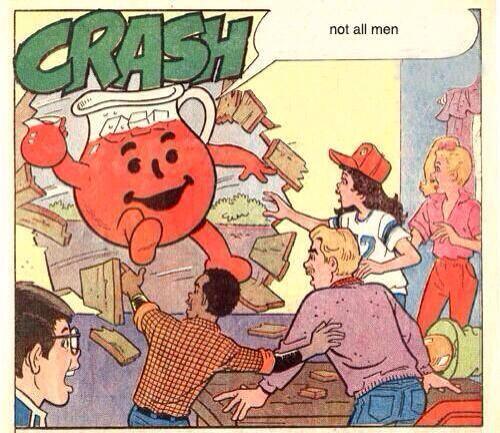 Much has been written about the “Not All Men” defense. These interjections not only interrupt women’s conversations about sexism, they also turn attention to the men, demanding apology for the perceived personal insult. This shifts the power back to men, who once again become the center of conversation. As a result, the status quo of patriarchy remains intact.

Fragile men who are offended by the discussion of sexism or confrontation by women who stand on their own without surrender to male egos, not only demonstrate their privilege, but also their fear. They may consciously fear being insulted, criticized, and rejected. But their subconscious fear is of losing control of women, and of the male privileges they’ve been taught that they deserve.

So what do we do? We deny the craving of fragile male egos to be affirmed. We refuse to lessen ourselves so they men might feel better. We challenge and reject their manipulative tactics. We name their behavior in broad daylight. We reject responsibility for protecting their egos. We let them break.

For help getting out of an abusive relationship, visit RAINN, No More, or your local women’s shelter.

Mila Salander is a mother, a feminist, and an emotional and sexual abuse survivor. She offers her experiences in hopes of helping others through their own personal struggles, and to further her own healing.

This essay is a part of the Survive Your Story Guest Exchange.

Sexuality and Poetry: Read Me in Sacred and Subversive

Refining Our Stories on the Page as a Path to Recovery: The healing power of writing

Shawna Ayoub is an essayist, fiction writer, poet and instructor with an MFA in creative writing from Indiana University. Some of her work has been published in The Manifest-Station, Role Reboot, [wherever], The Huffington Post, The Oxford Review and Exit 7. Her writing explores the intersections of race, place and survivorship. She writes with honesty about her own experience in order to transform pain.