I keep all my honesty down the barrel of a gun

Hail to the guardians of sleep, for one year ago last night, they stood at the foot of my bed, or at the entrance to the baby’s room, in shifts, maybe even drugged  out cold on the couch so I might still have my head when I woke. Hail to the living room drywall, which absorbed fists meant for me the next morning, didn’t care if tore it to shreds, and did. Hail to my broken laptop, my broken phone, my broken framed photos, for there being nothing left for to break after the drywall. Hail to the therapist who told me she looked for my name on the news each night, and to my remembering that at precisely 11 AM. Hail to the day missed work the previous week, which made finally agree had to go, so wouldn’t get written up. Hail to the closet door that held me up when slammed me into it, told me hated me only please promise I’d be there when got home, and cupped my breast, and reminded me it was birthday tomorrow. Hail to the lip balm I’d put on just before it all went down once more, for whatever barriers there were between our mouths when pressed them together for the last time, I am grateful for them. Hail to the bag that I’d already half packed, then quickly stowed under bed sheets in that very closet when pounded up the stairs the night before. Hail to all the stolen times, driving or breastfeeding, that I let myself hate , all those little balls of hate, for they found and loved each other, held hands in my solar plexus until they became the courage I channeled to look right into eyes and lie, I promise, just the once. Hail to car for starting, and 45 minutes later, to mine.

I keep all my honesty down the barrel of a gun—

—how much do you want? I don’t want to hurt anyone. I don’t want to be a person who sees another person’s face when she pulls up on a target but you know the target never wants to be a target, either. I do all the right and careful things, load the old clip on my borrowed pistol patiently so it doesn’t catch, check the chamber, point the barrel down and away, but to fully respect the machine, I should be seeing only iced tea jugs with dirt weight, maybe groundhog or deer, never humans. Never red. I’m a slow but sure shot among the patient men who teach me now but might not think to teach their daughters, who slosh beers and aim with quick confidence on a Sunday afternoon, who have practiced killing only bottles a hundred times. They would tease me if they knew—wannabe badass, NRA groupie, reckless amateur who thinks she’s a reckoning—if I said nothing has ever felt so right in the hands of my aftermath mind when one lets me hold his .357 8-shot Taurus Mag. All the torn American bodies, I know, but see, I also remember the .22 bolt action that leaned loaded as an omen beside a back door I was once dragged through by my hair. I didn’t ask for this urge, this imagery of his face changing from rage to fear, of my face changing from fear to rage, all of it changing gunpowdered hands like we’re trading triggers. I didn’t ask for red. Show me the proper stance of the disembodied when none of the safeties are on.

I’m glad we had this talk

I don’t know if I’m feeling what I’m feeling or if I’m feeling it because I’ve been so afraid. I’m afraid everything I feel is just a reaction. Reactions are varied, erratic even, like how I sometimes feel. I sometimes feel; other times I don’t. I don’t know the difference between dismemberment and disassociation, only that panic leaks from my every severance on days that I have to talk to people. I have to talk to people more, I know, but that’s a reaction, too. Reactions too quick, loud, passionate, indifferent, too magenta, and I might as well be talking to a houseplant, a tarot. A tarot reading with a friend is therapy while therapy is kickball on my grade-school playground is a bar crawl is a bar brawl is a hangover. Hangovers and pages—nod, page, and need me like I need you. You need this or that bruise to be bigger to believe me, or you don’t. Don’t you get tired of not believing all the me’s? Theme: we tell you the part about blood on our mouths, a broken rib or a vaginal tear, and you are in love with us for a minute, want to touch it yourselves. Your selves are pure and fleeting reaction, too, but you don’t seem concerned, why is that? Is that what it means to be ok? Being ok is being healed. Being healed is not the same as never having needed to heal.

Stacia M. Fleegal is the author of two full-length and three chapbook poetry collections, most recently antidote (Winged City Press 2013). Her poems have appeared in North American Review, Fourth River, Barn Owl Review, UCity Review, decomP’s Best of 10 Years anthology, Crab Creek Review, Knockout, Best of the Net 2011, and more. Her essays have appeared at Open Thought Vortex, Quaint Magazine, Luna Luna Magazine and Delirious Hem. She co-founded Blood Lotus, teaches online writing courses for the Elizabeth Ayres Center for Creative Writing, and works for the Peace & Conflict Studies department of a private liberal arts college in central PA. She’s @shapeshifter43 on Twitter and blogs at anotherwritingmom.wordpress.com. These poems are part of a recently completed chapbook called Dear Hollow, which explores the isolation and disconnect of the immediate aftermath of escaping a domestic violence situation. Another poem from this chapbook was recently published at Animal: A Beast of a Literary Magazine.

These poems are part of The Honeyed Quill’s Survivor Series.

Fear to Speak, Courage to Publish: Faith for OTV

A Letter to the Sister I Ate in Utero 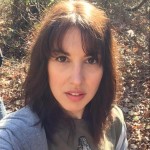 Can anyone tell me Which Way to Oz? link.medium.com/wk3PVYN4S6 #poetry #writing #relationships

This is one of two reasons I'd recommend #running barefoot on the highway. link.medium.com/CfwisTQEP6 #relationships #love #lgbtq

I’d Like to Unsubscribe from #toxic #relationships link.medium.com/Zy5VqbC0I6 #abuse #life