The Beast Within Me

As a survivor of childhood abuse, it’s hard for me to accept compliments. Many people describe me as sweet and sensitive. I often deflect these compliments by crediting my mother or even the abuse I suffered. It’s easy to be nice to people so that you can feel that you’re not like your abuser. The problem is, though, I am sometimes like my abuser.

I try to warn people about the beast within me, and they often refuse to believe me. Very few people have seen it. The beast is not like the caring, empathetic man they know. The beast is angry and capable of violence, even killing. Years of experience and training have helped me recognize when the beast is threatening to emerge and how to put it back to sleep. Luck has allowed me to escape situations that would cause it to emerge.

My greatest anger is triggered by bullying and threats to safety. An arrogant co-worker throws around his weight, barking orders he has no right to give and belittling those he know won’t fight back. A careless driver nearly runs me over as I cross the street in a crosswalk with the walk sign lit. I can’t tolerate these things happening to me anymore, and I certainly can’t stand for it to happen to others. Everyday occurrences that trigger memories of when I have been abused, threatened, and hurt cause the beast to awaken and grow within me.

I struggle to describe this process in words. It’s like a musical note that builds in volume. Louder and louder it swells, building toward an explosive outburst. Often, I break down in tears, hating myself for this beast within me. I’m afraid to talk about the beast because I don’t want anyone to think of me that way. I definitely don’t want people to know how dangerous it is, especially how close it once came to taking a life.

Much of the abuse I suffered as a child wasn’t physical. That’s not to say I didn’t endure physical violence. I certainly did. My body was hit and violated by an older girl who was often entrusted to care for people’s children. People were often impressed with how well-behaved children were while in her care. They never realized that we were all afraid for our lives.

She didn’t hit us often because she knew leaving bruises would expose her. She made it all much worse, though, by threatening us repeatedly, sometimes verbally, sometimes with knives and other weapons. She didn’t hit us often in part because she didn’t need to. We were much too afraid to inspire worse violence from her. It was that fear that created the beast within me, and she nearly died at the hands of that beast.

As I reached puberty, I had grown too large to be intimidated by her fists. That only increased her use of knives. Anytime I showed the least bit of defiance, she would pull out a knife, often a large butcher knife. I can still remember it as she held it to my face as she pinned me down, screaming in my face that she was going to kill me. And I can still remember the last time she pulled out that knife. It was the day the beast first appeared.

My defiance was petty and childish. She walked into the room and without saying a word or even acknowledging my existence, she changed the TV channel. I changed it back. We began to argue, and she headed to the kitchen to grab her favorite weapon. I ran into my bedroom and grabbed my baseball bat. The beast was fully awake for the first time.

She demanded I put the bat down. She made a grab at it but had her hand swatted away. There would be no backing down. This was all going to end now. The beast was only waiting for her to make a move. Lunge toward me. Slash at me. Raise the knife to stab me. The beast was ready and would not stop until her threat had ended. The beast knew… I knew the threat would only end with her death.

There are some benefits to the beast within me. I have stood up for people being bullied. I have served in two wars. I have and will risk my life without hesitation to protect myself and others. Please don’t praise me for being brave, though. These are not acts of courage. They are acts of atonement. I watched her abuse others and failed to stop it. Knowing how her abuse has damaged my own life, I would be happy to give it to save another.

Drew Sheldon is a disabled veteran and a feminist. Find more from Drew on his site Straight White Male Seeks Knowledge.

This essay is part of an exchange. To read Shawna’s work on Drew’s site, click here.

In Case of Fire (for Donald Trump) 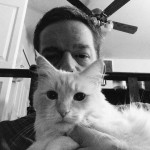